The clocks of Flinders Street Station are a familiar landmark to commuters and visitors alike. Few people probably know their history, though, or the story behind them. These clocks are one of the most recognisable features of the Flinders Street Station. The two towers above its entrances were built in 1914 as a way for railway workers to check the time without having to leave the station. They remain as such today. These clocks tower over Flinders Street at a height of 77 metres, making them some of the highest in Australia; they’re visible from up to 10 kilometres away. But there’s so much more to these towers than their height and their clock hands!

The History of Flinders Street Station and its Clocks

The main Flinders Street Station was built in 1901. It replaced a wooden structure that had been built in 1854. This wooden building had been designed as a temporary structure, but it had lasted until 1901, being replaced with a station that reflected the growing importance of Melbourne as a major commercial and industrial city. The two clock towers were added in 1914, as were the wings connecting the main building to the towers. The clock towers were originally intended to be part of the design of the original station, but the project was delayed. The clocks were manufactured by the firm of Johnson’s in Sydney, and were installed in the towers in 1914. The installation of the clocks was a major engineering feat, with the towers needing to be braced to withstand the weight of the clock mechanisms. The clocks are controlled from inside the main building, with a central mechanism controlling the actual time on the clocks. The station had a major upgrade in the 1920s, with the addition of side wings and a pedestrian subway linking Flinders Street with Swanston Street. 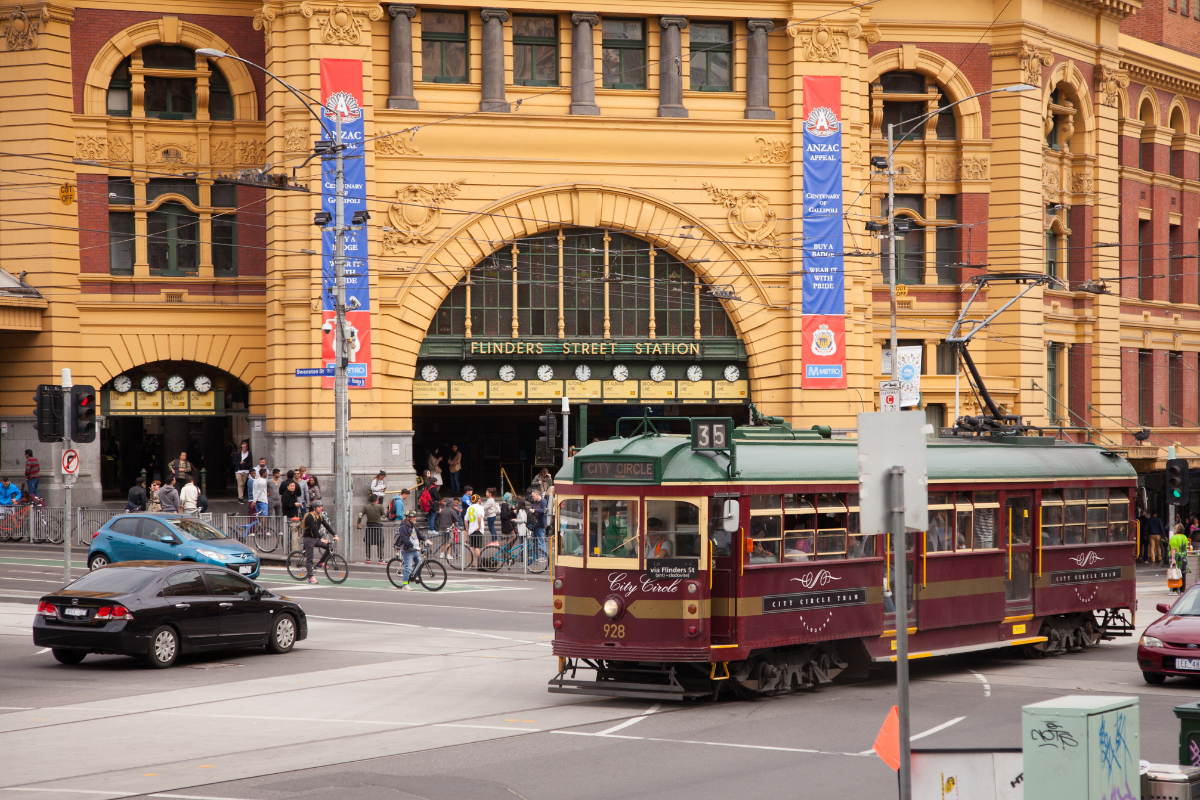 What’s so special about these clocks?

The clock towers were once were two of the largest clocks in the Southern Hemisphere, but they’ve since been superseded by larger clocks. The clocks are made of copper, which has turned an attractive green colour over the years, with a central face that’s made of opal glass. The copper on the towers is made thicker at the top, where the clock hands are, to withstand the turning motion required by the clock hands. The two clock towers each have three clock faces, with two showing the time and the third featuring the day of the month. The central tower is connected to the main building, and the side towers are connected to the wings. Another special feature of these clocks is that they are driven by weights, which are located in the basement of the main building. The actual timekeeping mechanism is in an adjacent room, and the power from the weights is transmitted to the mechanism by a series of pulleys. The clocks are wound manually once every week, with a winding key in the basement being used to turn the wheels. These clocks have an accurate timekeeping mechanism, and have never needed any major repairs.

Why was the Flinders Street Station built?

The two clock towers were built to provide a way for railway staff to check the time without having to leave the station. The clocks in the towers were visible to railway workers, passengers, and people in the streets below. The station was built as part of Melbourne’s urban expansion during the late 19th century. The station was built as a terminus for both passenger and cargo rail services, as well as a major centre for goods distribution. The station was also built as a major architectural feature, with the two clock towers intended as a landmark feature on one of the city’s main thoroughfares.

Two Identical Clock Towers – But only one works! 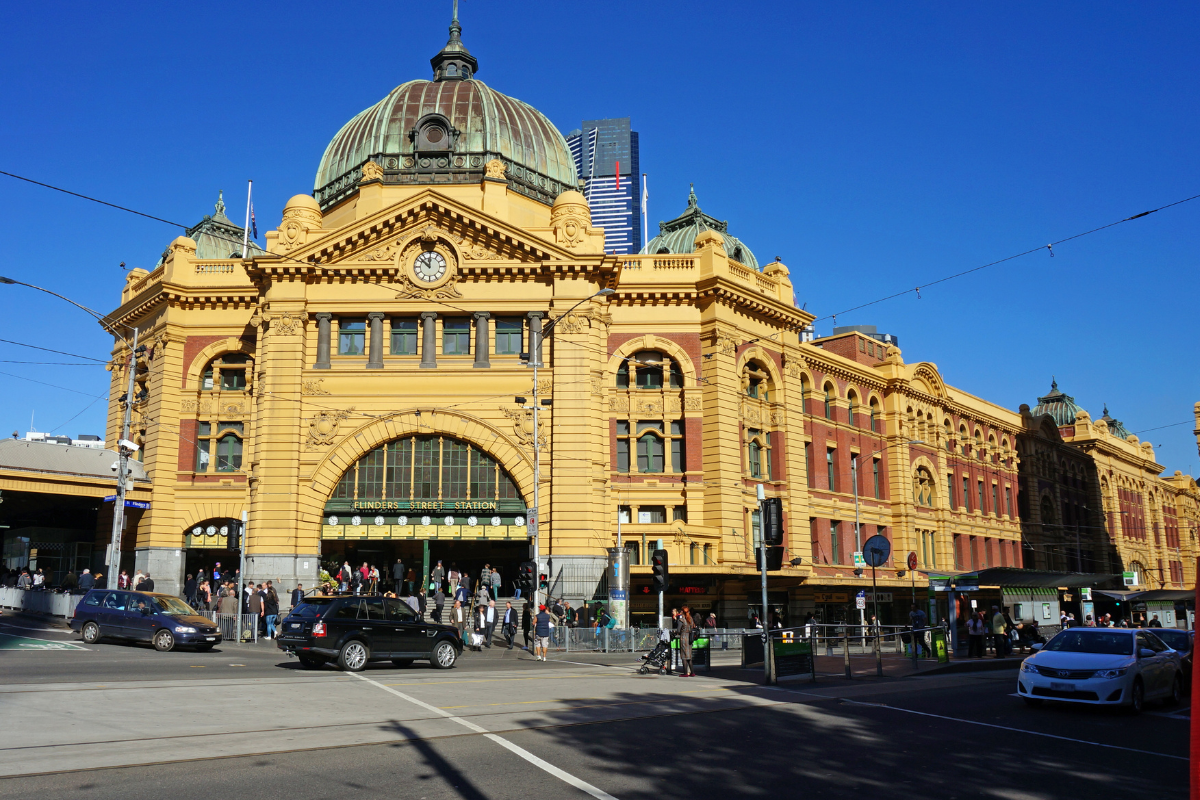 The clock tower shafts are made of sandstone, with decorative architectural features that reflect the Art Deco style of the early 20th century. The decorative features of the sandstone at the base of the towers include geometric shapes, chevrons, and stylised depictions of leaves. Inside the tower shafts, there are two feature pieces of architectural decoration that were added in the 1920s during the building’s Art Deco upgrade. One feature is an architectural cartouche that features a stylised peacock, a symbol of immortality. The second features a stylised depiction of a ship. It’s likely that these designs were chosen because they were symbols of Victorian industry, especially Melbourne’s role as a major port.

Inside the Clock Tower Shafts: Passengers, Don’t Look Down!

The clock tower shafts have always been hollow. They were filled with bricks when the towers were built, but the bricks were removed in the 1920s to create space for the winding mechanism. Inside the shafts, there’s now room for passengers to climb the stairs and look out the windows. Visitors to Flinders Street Station can climb to the top, and peer out over the city from above. This experience is not for those with a fear of heights, though! The clock tower shafts are surprisingly narrow, with each being only a little wider than a man’s shoulders. The shafts are held up by a series of wooden joists and beams, with no concrete pillars inside. This means that the shafts are extremely flexible, and sway in the wind, but they’re strong enough to withstand their constant use.

The clock towers at Flinders Street Station are a fascinating architectural feature, and they are a major landmark in the city. The towers are a distinctive feature of the station and the streetscape, and the Art Deco features of the tower shafts make them even more interesting. These towers are much more than architectural structures; they are a major part of the history of Melbourne, and have been since 1901.