Atomic clocks are the most accurate timepieces ever invented. They work by measuring the frequency of atoms, which is then used to measure how long it takes for certain energies of atoms to flip states. That time interval can be translated into a unit of time with incredible accuracy. Atomic clocks are used in cell phone networks, GPS receivers, and even Google’s search engine results pages. Now that you’re up to speed on atomic clocks let’s delve into how exactly they work.

How Do Atomic Clocks Work?

The current international standard for timekeeping is Coordinated Universal Time (UTC). It’s linked to an atomic clock known as the International Atomic Time (TAI), which itself is linked to its predecessor Ephemeris Time (ET). These clocks were used to determine when Daylight Savings Time would occur.

Current atomic clocks work on the principle of microwaves, a type of electromagnetic radiation with a frequency measured in units of hertz (Hz). One Hz is equivalent to one cycle per second. 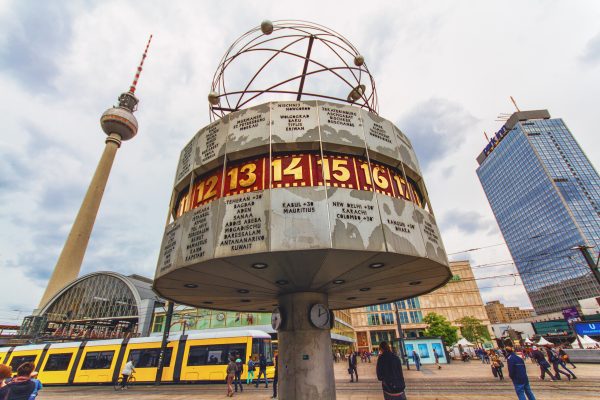 Although a microwave’s frequency can be any value, it’s most common for them to have frequencies in the GHz range, i.e., billions or trillions per second. These microwaves bounce off electrons orbiting an atom and cause them to absorb energy from the microwave. In turn, this shifts many of these electrons up by one energy level — effectively meaning they flip the state from being at a lower energy level to being at a higher one after absorbing energy from the microwaves. This shift in the electron’s energy level is called hyperfine splitting.

The time it takes for these electrons (which are now at a higher energy state) to return to their original lower energy state is what an atomic clock reads, which is then translated into 1 second. However, this transition can take anywhere from 108 seconds to 1016 seconds — that’s up to 16 orders of magnitude or 100 million times longer! So there needs to be some mechanism used so the atoms don’t have too much time between microwaves.

To solve this problem, atoms are kept inside a vacuum chamber with no air resistance — thus eliminating any collisions between molecules and speeding up the rate of hyperfine transitions. These atoms are then clustered together in a way where they all have the same energy levels. In most cases, this is done by cooling these atoms to extremely cold temperatures so their velocity slows down immensely and they don’t have any excess kinetic energy.

What benefits of using an atomic clock over a traditional clock or watch?

Because atomic clocks are so accurate, they’re used for more than just keeping track of time. Atomic clocks can be linked to other sensors that detect elements like vibrations or movement. For example, the Global Positioning System (GPS) uses three atomic clocks on each satellite to ensure it’s extremely accurate and precise by reducing the error margin to about 1 meter at the equator.

Other examples include cell phone towers synchronizing their signals with each other through nearby atomic clocks to reduce errors in location data down to mere centimeters, as well as smart meters which use them so they can monitor energy usage more precisely, even if two nearby smart meters decide to switch between AC and DC power now and then. Atomic clocks are also used in computers and electronic devices to timestamp events — making it so they don’t have to use the system clock, which can lose or gain time as your computer gets more or less power from its outlet.

What disadvantages of using an atomic clock over a traditional clock or watch?

The biggest disadvantage of using an atomic clock is that if there’s a problem with the electrical grid powering all these atomic clocks, you’ll see errors in time synchronization for locations near those atomic clocks. In addition, if any of these clocks fail, you’ll need to rely on other types of clocks until the issue is fixed. Otherwise, bad things could happen like GPS satellites experiencing calculation drift and going off-course or smart meters reading incorrect energy usage levels.